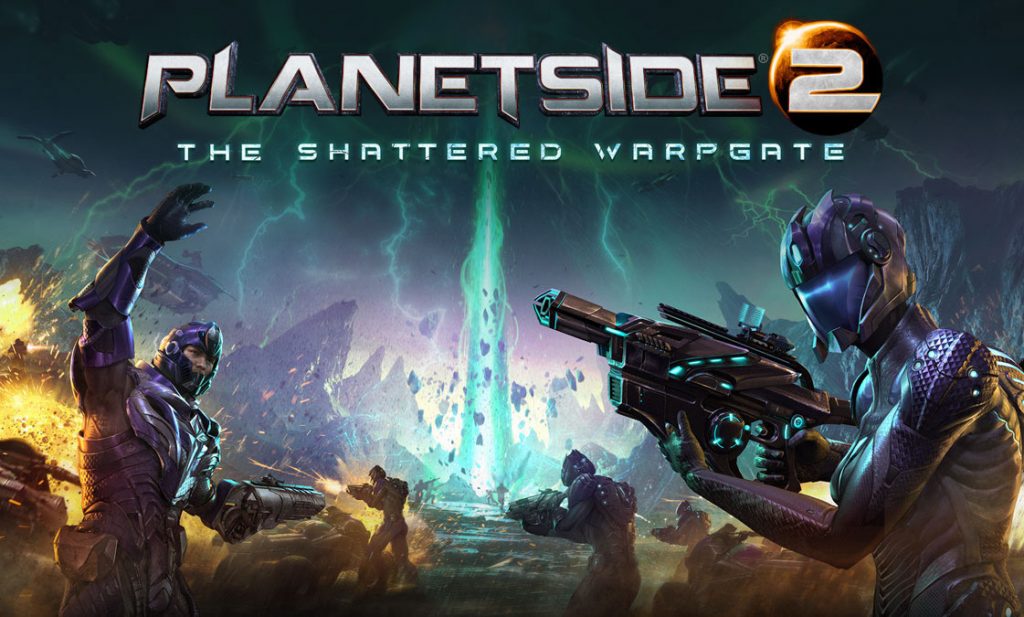 After months of work, the time has finally come for this massive, multi-faceted update to make its way PlanetSide. With The Shattered Warpgate, we overhaul the icy continent of Esamir, introduce an entirely new Campaign and Mission system, revamp Outfit resource accumulation and War Asset costs, and refine many other aspects of the game as well.

The continent of Esamir has gone through many changes since you last saw it. The Northeastern Warpgate has been destroyed, and in its wake are the time-frozen remains of an ancient Vanu structure, and a vortex of energy pouring into the sky.

With The Shattered Warpgate update, we introduce our first-ever “Campaign” to the game.
The story of The Shattered Warpgate centers around the detonation of a Warpgate in northeastern Esamir. Nanite Systems spearheads the investigation into the mysteries surrounding the event, and enlists the help of soldiers across all empires to help return stability to the land.

Unlocking the Campaign
The certification cost of a Campaigns scales with Battle Rank, and players with an active membership gain access automatically. When a Campaign is unlocked, it remains unlocked for all subsequent Chapters, and unlocking a Campaign with certifications must be done per character.

We hope you’ll find The Shattered Warpgate a welcome change of pace that will cement elements of the existing lore while continuing to create new stories for all to enjoy.

New Mission System
Players now have access to an all-new Mission system that offers up daily missions players can complete for rewards.
What’s a mission?

Contractors, Rewards, and Rarities
Each mission is dispensed from a “Contractor” that represents one of the factions in our world.
While all contractors have the ability to reward experience, boosts, and certifications, there are additional rewards offered based on the contractor.

Missions come in a variety of rarities which represent difficulty, time investment, and intensity. The higher the rarity, the better the rewards for that mission type.
Training Missions

· Typing “/leavechat mentor” or “/joinchat mentor” will allow those with privileges to leave and join at will.

and if that wasn’t enough…

Nanite of the Living Dead VII: The Seeds Must Flow

Your march across the icy tundra slows as you attempt to take stock of your surroundings. The cold wind howls, wrapping itself around your insulated armor. Just beyond the edges of your periphery, the shadows seem to shift… you could swear you’re being followed. A reluctant glance cast over your shoulder reveals nothing; no combat or convoys, not even the glint of a patiently trained sniper scope. A chill runs down your spine and a feeling of unease washes over you. You shake it off. Turning back to continue your path, that’s when it strikes you; that familiar feeling of sheer, undeniable terror. You stand paralyzed as its gaze pierces through you; hollowed, orange eyes peering into your soul… the Space Pumpkins have returned.

From Oct. 26 – Nov. 15 a special Halloween event will be taking place in PlanetSide 2.

Space Pumpkins and the elusive Galact-O-Lanterns are spawning throughout Auraxis. Smashing these pumpkins grant experience and a handful of Infernal Grenades (detailed further down.)

Sanctuary has been redecorated for the holiday season, and the vendors of Sanctuary are donning attire befitting the season.

Infernal Grenades are timed explosives that, upon detonation, ignite infantry and MAX units caught within the blast. Killing Space Pumpkins and winning Alerts will provide you with additional Infernal Grenades.

Tier 1
Unlock event masks and facepaints by speaking to the following NPCs on Sanctuary.

Holiday Cosmetics and Weapons
Find special themed cosmetics in The Depot for a limited time.