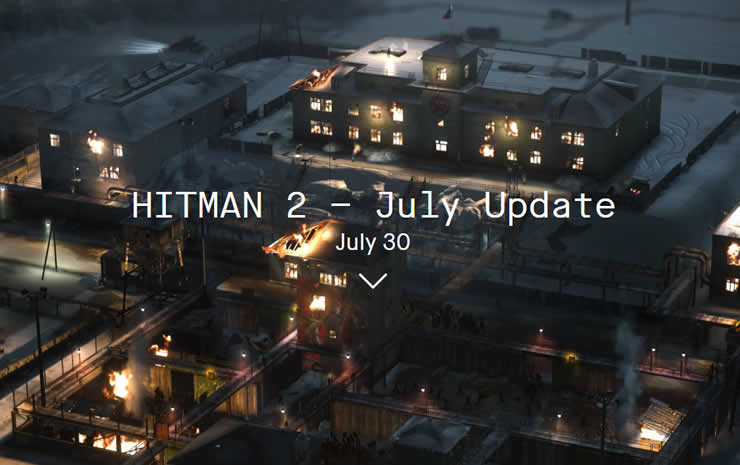 Sniper Assassin Map: Siberia (Expansion Pass)
Agent 47’s latest long-range mission takes him to one of the harshest climates on the planet, where he must eliminate two targets and start a prison riot to cover his tracks.
The mission name for this location is ‘Crime and Punishment’ and will include new trophies and achievements to earn. Agent 47’s rifle for this mission, ICA Druzhina 34 Arctic, can also be unlocked for use in all sandbox locations.

Contracts Mode in Hawke’s Bay
We’re adding Hawke’s Bay to your options for Contracts Mode. Create your own missions by tagging targets and setting the complications and requirements for others. Have fun!

Anniversary Suits
Celebrate 20 years of IOI with these suits inspired by characters from our previous games; Futo, Lynch and Christoper Stone (The Freedom Phantom).
Previously exclusive to the HITMAN: Definitive Edition, these in-game suits will be be available in HITMAN 2 for anyone who signs up for a free IOI Account.

You can sign up for an account either through the game itself, or via the website. Once you’ve done that, link your game and the suits will be added to your inventory the next time you launch HITMAN 2. If you already have an IOI Account, you’ll get the suits when you next play the game.

Toggle Aim
After player feedback, we have added the option to choose whether you hold or toggle the aim button. By default, the option will be set to Hold to Aim (how it has always been) but can be changed to Toggle Aim in the Options>Gameplay>Weapon Aim menu. This option affects aiming with guns and rifles (including Sniper Assassin mode) but does not affect 47’s ‘aiming’ when throwing; this will still require the play to hold the button to move 47’s throwing arc.

Illegal HUD Prompts
We’ve made a visual change to alert players when they are about to pick up an illegal item or perform an illegal action. Previously, there would be a small red exclamation point attached to the interaction button. Now, we have added a slightly larger exclamation point next to the interaction button and we’ve made the interaction circle turn red (rather than white) when performing the action. The ambition with these two small tweaks is to make it more apparent to players that they are about to perform an action that is illegal.

Stash Icon
We’ve added a small visual change to the Stash Points in-game (e.g trash cans) that will show a subtle icon to indicate to players that an item has been stashed there. Currently, each Stash Point has the interaction marker (small white square) that indicates that you can interact with an item. Now, that interaction marker will be ‘filled in’ to indicate that an item is stashed there.

In the example below, it is now easier to see that an item is stashed in the trash can (the icon is filled in), but there is nothing in the briefcase (icon is empty).

We’ve made three subtle changes to the Attention Meter to make it easier to know when you are gaining attention and how close you are to becoming compromised or spotted.
Firstly, we’ve made a change to the colour. Yellow is the new white and makes it easier to see.
Secondly, the meter will now ‘fill’ allowing you to see how close you are to being spotted.
Thirdly, we’ve made a technical change to the attention meter to prevent it from not being visible on-screen. It was previously a 3D object in the world and in some cases, depending on where the camera was positioned, it wasn’t visible to the player.

In the (zoomed) image below, you can see the new colour showing how much attention has been gained. The slightly faded yellow shows how much room there is for more attention before the guard will react.

Who is THAT?
We’ve fixed an issue where Diana, Agent 47’s handler, would not introduce targets (and key objectives) in some missions. She will now do so again in her trademark style. However, we’ve made a small tweak to give her a few days off every so often. Now, after hearing Diana introduce a target (or key objective) once, she won’t introduce that particular target again for a period of 48 hours real-time. We expect that this change will make Diana’s dialogue less intrusive for repeated playthroughs over a short period of time and make her less of a meme, whilst maintaining her impact and assistance to 47. Note: Key Objectives include things such as the virus in Sapienza, Soders’ heart in Hokkaido, etc.

SA KO OH NO
We’ve fixed an issue where the Silent Assassin rating would be lost if a target was knocked unconscious, killed in an accident and THEN the body was found.

SA RULES #2
We’ve addressed an issue where the Silent Assassin rating could be earned with 4 stars because the ‘Never Spotted’ bonus was sometimes not being granted after a SA playthrough. Now, the SA rating and all bonuses should be properly awarded after completing a SA playthrough. This was sometimes caused by 47 being almost/partially noticed by a target before killing them.

Tweaked Assignments
We’ve fixed an issue that was preventing Blair Reddington from completing the entirety of his loop in Embrace of the Serpent. He was skipping two specific steps that also meant that dialogue was not being triggered. Part of this fix included Blair triggering the correct dialogue, depending on the status of the chef.

Bank Chatter
We’ve fixed an issue in New York (The Bank) where two conversations could overlap in the Conference Room.

Time’s Up
We’ve fixed an issue where the ‘Time’s Up’ Challenge in New York (The Bank) would not always unlock correctly.

Lights Out
We’ve fixed an issue where the chandelier in the main hall of the Bank would ‘flicker’ and temporarily disappear after being destroyed.

Bank Cover
We’ve fixed some issues with 47 taking cover near the staircase to the CEO’s floor in The Bank.

Shot Gun
We’ve addressed an issue where the Sawed Off Bartoli 12G Shotgun (New York Mastery Unlock) could not be equipped as a starting weapon or placed in an Agency Pickup. The shotgun can now be used in those ways. However, it can no longer be holstered during gameplay and will instead function like all other shotguns in terms of being placed on 47’s back. To support these changes, we’ve altered the description of the weapon and renamed it to the “Customised Bartoli 12G”.

Update: This change is temporary and was inadvertently included as part of our investigations into how to we could make the weapon work properly with weapon stashes. With our next update (August), we will revert the weapon’s name and holster-ability (yes, that’s a word) as well as enabling it to be placed in large stash points.

Half-Baked Hippo
We’ve fixed an issue where Jorge Franco would sometimes suspend his routine during the ‘Half Baked’ Mission Story.

Locked Closet
We’ve fixed a community-reported issue where 47 could not exit a specific closet in the Crows Hideout in Mumbai. If you’re not happy with this fix, you can still enter the cupboard and refuse to leave.

Taxi Exit
We’ve fixed a community-reported issue where player-made Contracts created in Mumbai can be insta-failed if the “Required Exit” is set to a taxi driver who is then distracted or affected by combat.

Muffin Melee
We’ve fixed a community-reported issue where muffins and snowballs were categorised as Gear. They are now correctly placed in the ‘Weapons – Melee’ category.

A Quick Fix
We’ve fixed an issue where the “No Evidence” challenges would not be completed when players exited a mission, despite fulfilling the requirements. Once cause for this was immediately exiting the mission after eliminating a target. We’ve made it so that a fast-exit will still grant the challenge when the requirements are met.
Note: See the Known Issues below for an outstanding ‘No Evidence’ issue.

Lost Items
We’ve fixed an issue where thrown items could get stuck out of reach in certain ceilings in Mumbai. Thrown items would cause NPC’s to investigate the noise in the room above.

Roadmap? Jeppe!
We’ve added an option to the Featured Hub to allow players to view the newest monthly Roadmap. This will function as a one-time pop-up message when a new Roadmap is released each month and will give the option to visit our website (this one right here!) to get more details. It will then be a permanent fixture in the Featured Hub so that it can be reviewed and admired at any time.

Press P for Patch Notes
We’ve added a ‘hard button’ at the very bottom of the Options menu that will take you to our latest Release Notes / Patch Notes. If you’re reading this after pressing that button, you probably just found out about that.

Busted (Legacy)
We’ve fixed a community-reported issue where 47 was unable to pick up the bust in the storage room in Paris.

Step Up (Legacy)
We’ve fixed a community-reported issue in Bangkok where Agent 47 would not be trespassing on a specific step in the staircase between the lounge and the kitchen.

SSAO
The ‘SSAO’ setting now has more options to select. Previously, this setting had two options; on or off. Now it has six options; Off, Minimum, Low, Medium, High and Ultra. These can be set in-game or via the Launcher.

We’ve listed some of the game’s known issues below, so that you know we’re aware. We’ve always got eyes on the Technical Support and Bug Report threads on the Forums and Reddit too, so if you’ve reported something there, we almost definitely know about it.

To save us from writing it repeatedly, “We are aware of an issue where…”