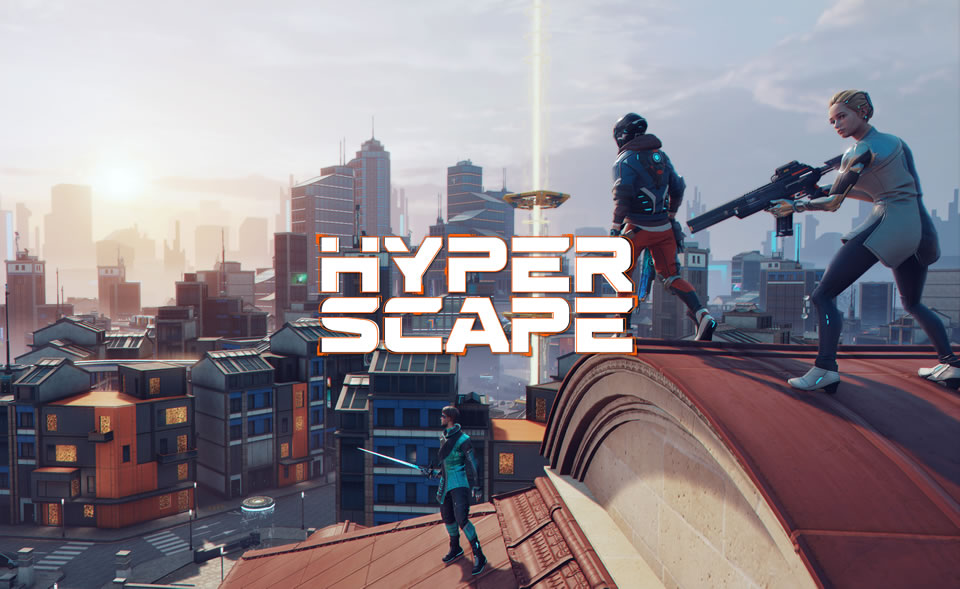 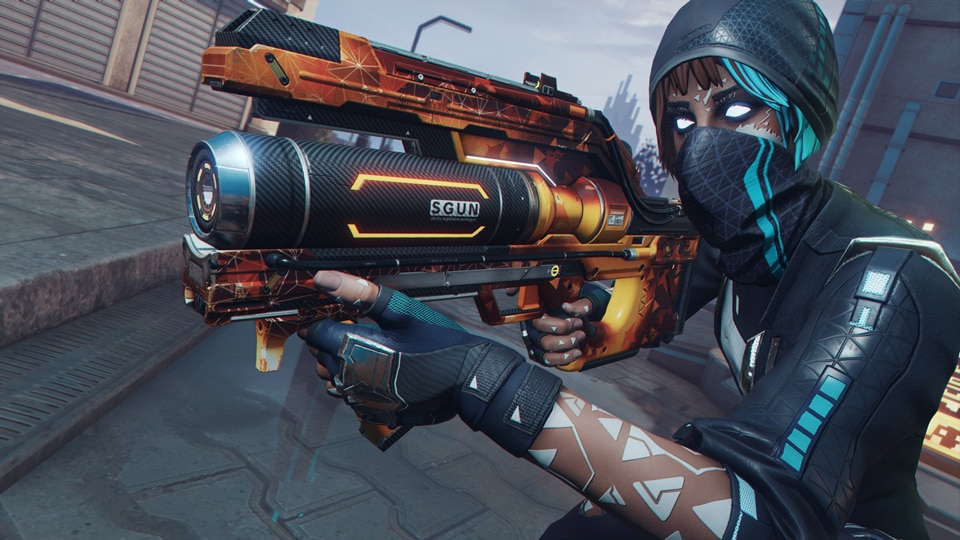 The Atrax is a full-auto rifle which shoots sticky explosive projectiles.

The chemical projectiles from the Atrax will detonate instantly when hitting a Contender, but when hitting an environment surface, they will instead stick to it and detonate shortly after.

Any enemy target caught within the Area of Effect of the explosion will suffer damage and a short slowdown effect.

The Atrax is an efficient and versatile weapon, but it has a very limited magazine clip size, so watch your ammo count closely! 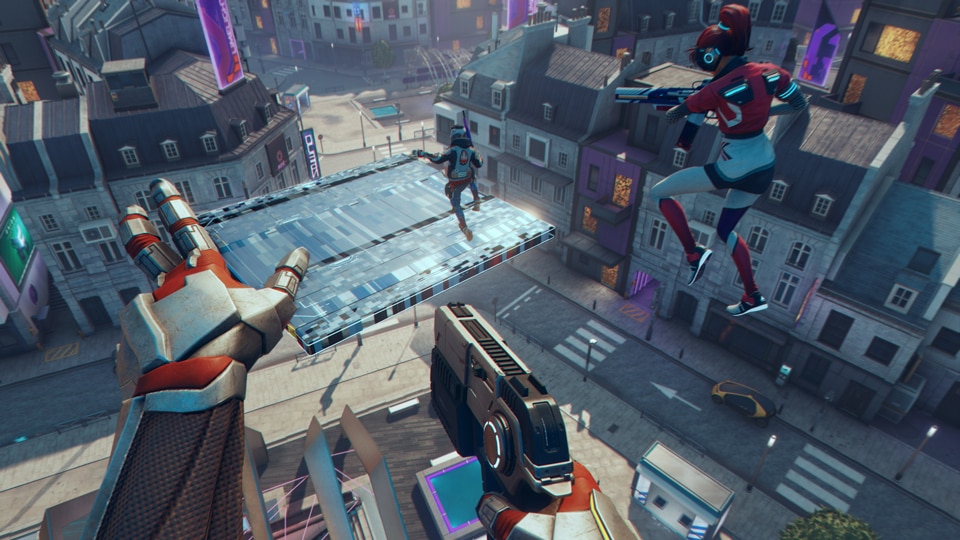 THE PLATFORM HACK WILL MAKE ITS DEBUT IN HYPER SCAPE A LITTLE LATER IN THE SEASON 2, as we introduce new Limited-Time Modes.

It will allow to deploy a small platform near you, to cross large streets of build temporary vantage points. Platform Hack has the shortest cooldown of all Hyper Scape hacks with a minimum cooldown time of 3s at full fusion! You’ll be able to create platforms easily but be careful as it is quite fragile, and any damage will destroy it.

Developer Notes: We decided to introduce the Platform Hack later in Season 2, and only in certain game modes for now. The return of the Magnet Hack (see below) already almost adds a new Hack to the game meta and that needs to settle in. We also felt it was better to try out the Platform in some of our Limited Time modes, like the upcoming Floor is Lava mode where it can have a particularly interesting impact. 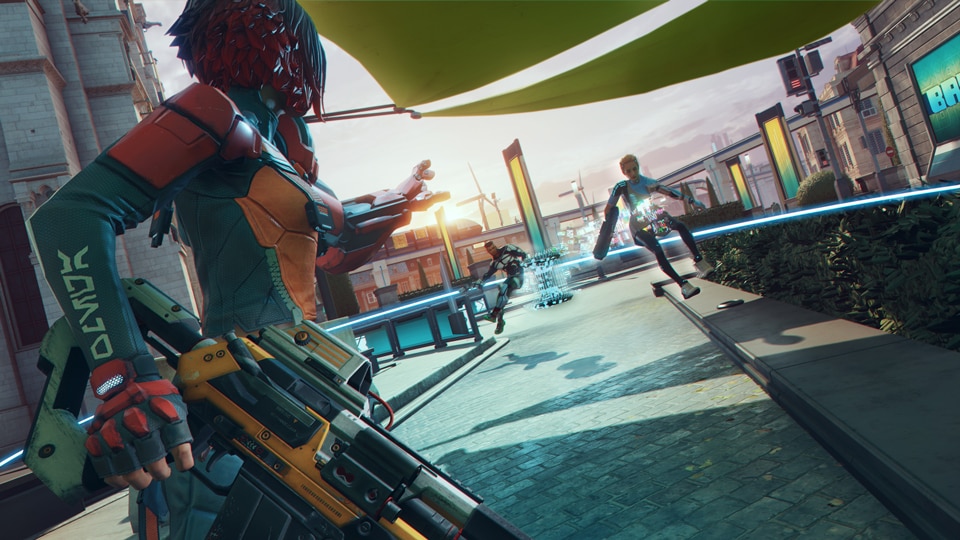 The Magnet Hack is finally back! With the release of Season 2 we’ve fixed the sound issues related to the Magnet, which allows us to reactivate it now. It returns in the same state as it was in early Season 1. 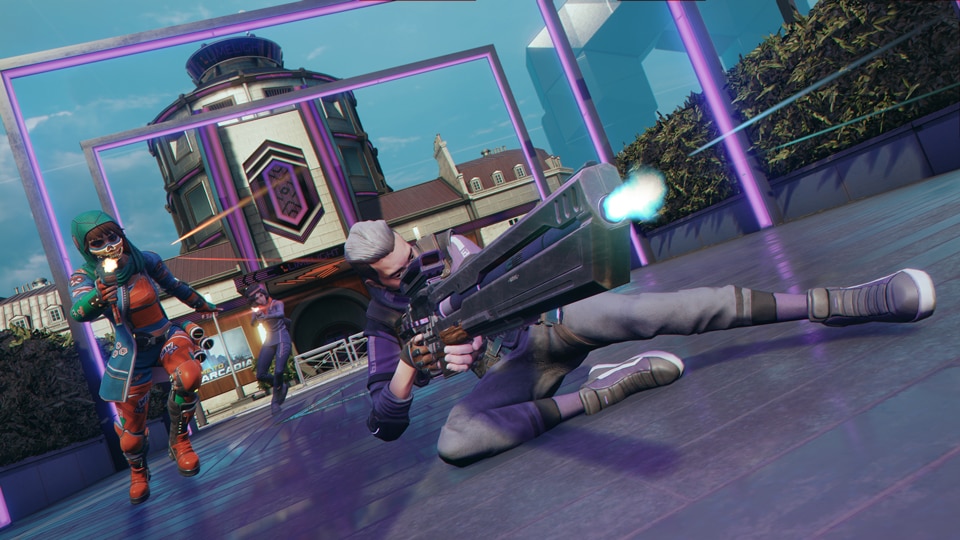 The Infinite Slide is a new Game Event where the duration of all sliding movements become almost infinite, allowing you to slide for very long distance. While sliding feel free to shoot all around you 360-style! Challenge your squadmates to a slide-off! 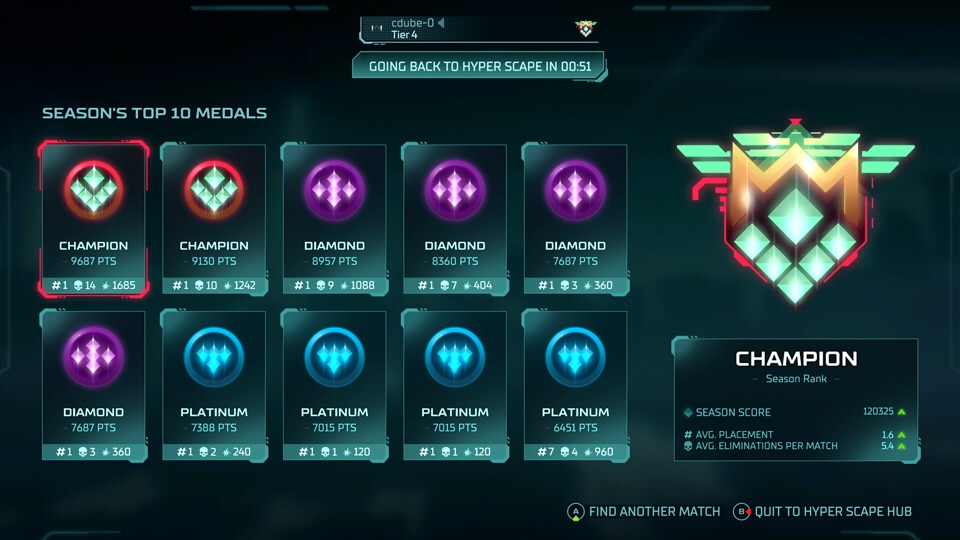 Season 2 introduces the first version of our new Player Ranking system which aims to bring a competitive edge to the community by allowing players to compare their Seasonal progress amongst each other. NOTE: This system does not affect matchmaking.

There are 6 RANKS in Season 2:

At the end of each CROWN RUSH SQUAD match you play you will receive a MEDAL (Bronze, Silver etc.) based on 3 stats:

You will start the Season Unranked until you have gathered at least 10 MEDALS, then the system will kick in and your initial Rank will be calculated and appear, based on:

Your Rank will be displayed on your nameplate in game.

After your initial placement, YOU CAN CONTINUE TO IMPROVE YOUR RANK THROUGHOUT THE SEASON by getting better Medals or improving your average kills & placements. Whenever you earn a better Medal than one currently in your Top 10, the one with the lowest Match Score will be replaced by the new one.

For now, only CROWN RUSH SQUAD MATCHES WILL COUNT TOWARDS PLAYER RANKING. Limited-time game modes do not affect a player’s Rank as they feature game modifications that have a significant effect on the performance values that affect Match Score. 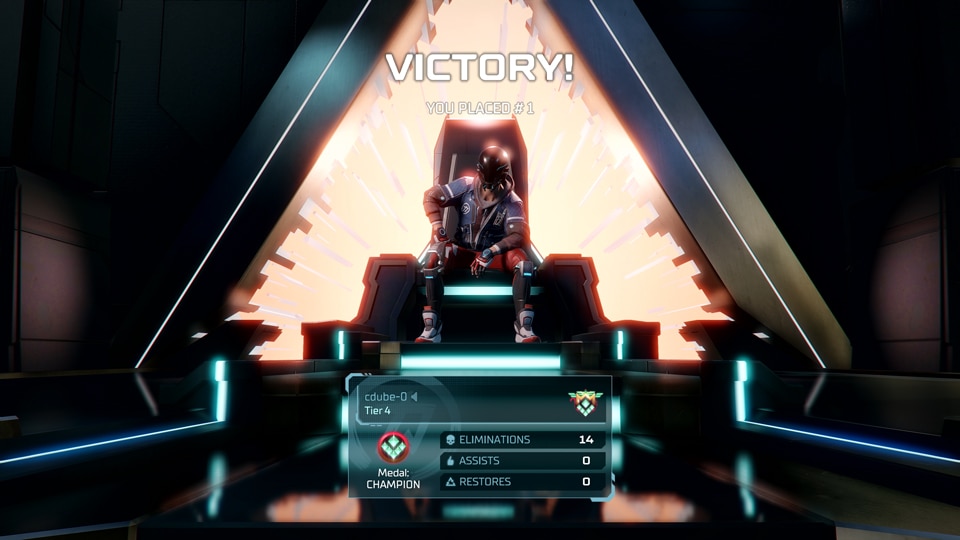 The details of your Ranking can be seen after every match during the End of Match screen, and your PLAYER PROFILE has also been upgraded with additional stats to support this system.

Developer Notes: This is only the beginning for the Player Ranking System, and we’ll continue to add features to it in the future. Please note that this first version will be a test for the system’s balancing which we might have to adjust & reset during the season if necessary. 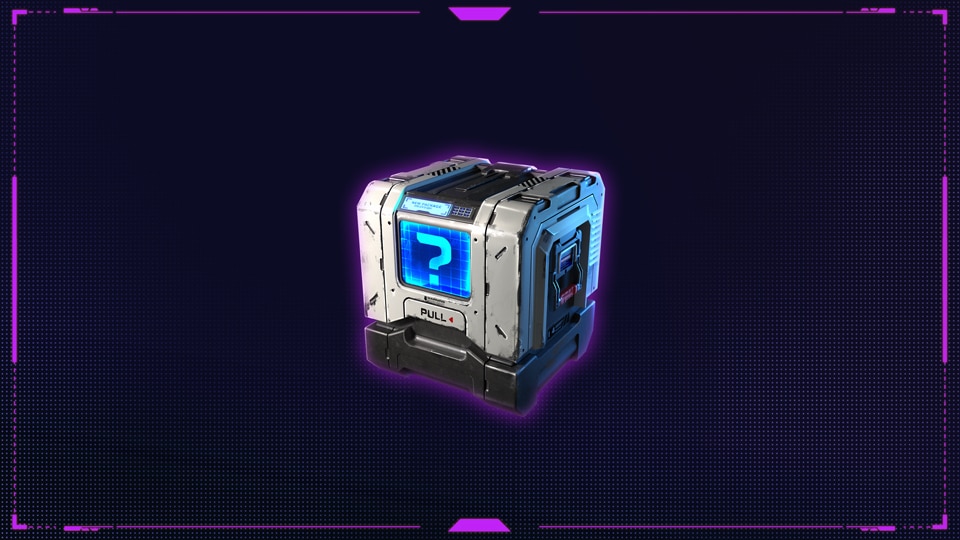 Every day, you can now collect a FREE DAILY GIFT within the Shop! Simply head to the Marketplace Portal located left in the Playscape HUB and select the Daily Gift tile in the Shop tab.

The Daily Gift will grant you various rewards that can range from Battle Points to level up your Battle Pass, to unique cosmetic rewards. As you collect Daily Gifts, there is also a progression towards a SPECIAL GIFT which guarantees the drop of a special cosmetic reward. Each time you collect 6 Daily Gifts you will be awarded 1 Special Gift.

A new Gift is available at 1PM ET / 5PM UTC EVERY DAY!

The Player Profile has been expanded to your current Squad as well. You can now access the Profiles & Stats at any time directly from the Social Menu, where you were already able to manage your Squad options. 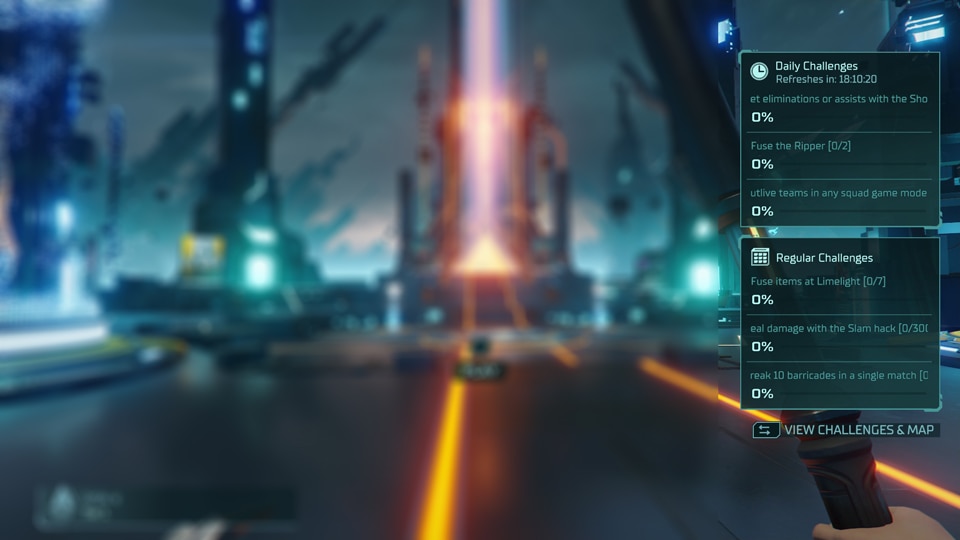 The Challenge system has received several new features to expose it better and make managing challenges easier, even during a match. 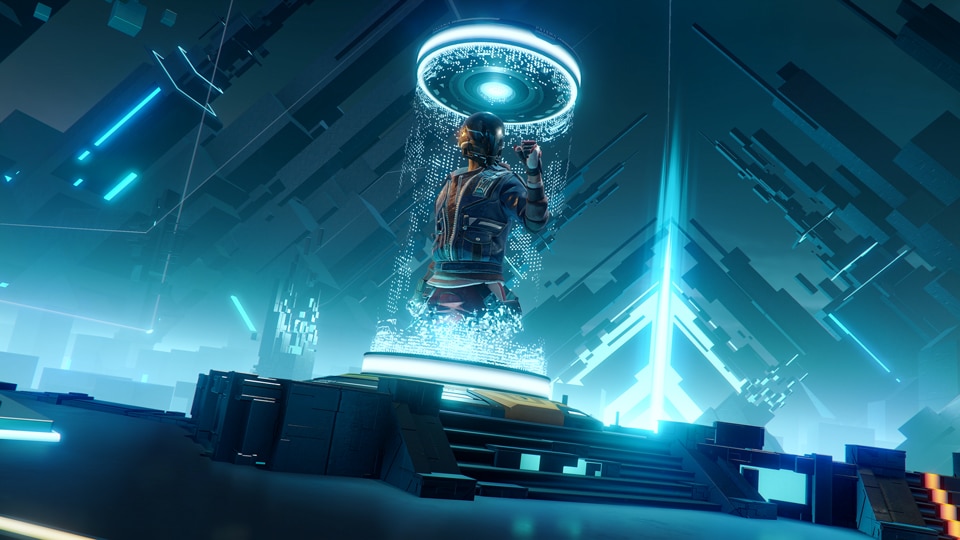 Up to Season 2 the large Holograms of Neo Arcadia had been only displaying Ultimate Grace. Now each game’s Match Leader will have their own Holograms, names & stats displayed during the match! (The Match Leader is the Contender with the highest elimination count at any given time.)

Also, in the Hyper Scape HUB the hosting Contender’s Hologram will now be displayed. 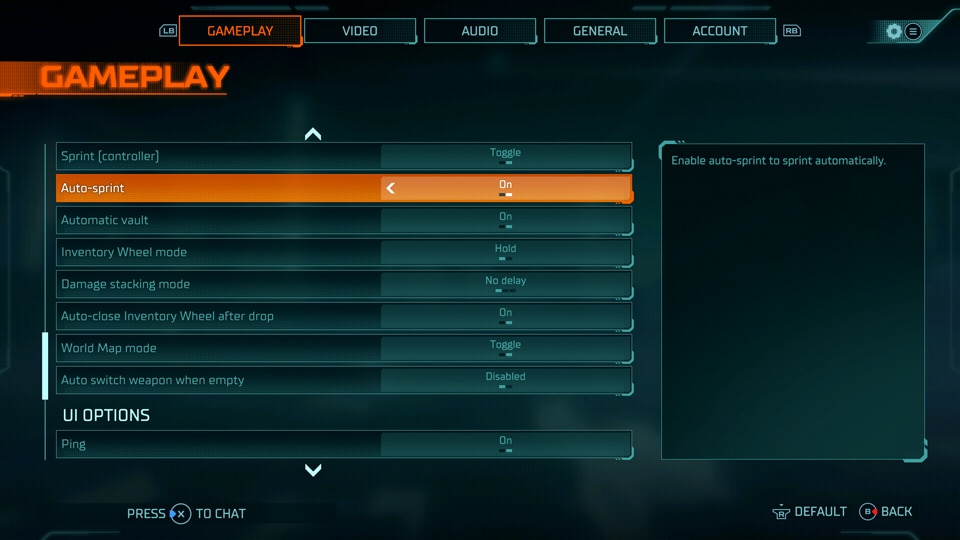 Fulfilling one of our most frequently community quality-of-life requests, a new setting has been added to the Gameplay options to activate the Auto-Sprint function. Once activated you will always be sprinting when moving forward with no additional button presses necessary. Save your fingers!

This setting is Off by default. 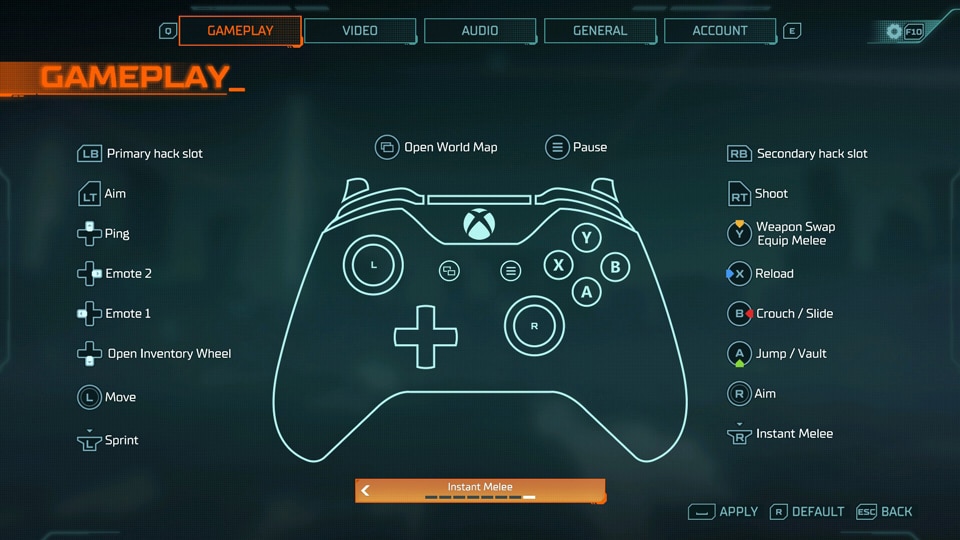 For Controller players, we’ve added a new control layout preset introducing Instant Melee action; it starts from the same configuration as the default layout with the addition of the direct melee button on Right Stick Click (R3).

Note the following changes as well:

Developer Notes: This is just a first layout preset giving controller player an access to Instant melee action; more presets with that option will be added soon.

Starting with Season 2, the format in which the Game Modes are available to play will change to offer a choice between a more competitive& ranked mode, and a more arcade one.

The CROWN RUSH SQUAD tile is going to be the RANKED mode (when you play in that mode you will earn ranking score). This mode will be present for the whole season.

The second game mode tile will offer a more ARCADE-oriented playlist that will ROTATE EACH WEEK. Those arcade modes will NOT BE RANKED (they will not earn you ranking score) and will offer a less competitive experience.

Developer Notes: The change here is to better manage our player community without splitting them between too many playlists at once. The goal is also to give a clearer game mode option for our more competitive players while also providing the Arcade area for those looking for less pressure in their experience.

All the bullet weapons now have Damage Falloff (note: sniper rifle received this change in our last patch). The impact differs from weapon to weapon but overall, the intention stays the same: The goal is to avoid abusive long ranges attacks, not to make Damage Falloff a major parameter of the combat loop.

For multiple weapons also, the ADS has received a boost in term of Aim-assist both on PC & Consoles to reinforce its value vs. Hip-Fire.

Developer Notes: The Dragonfly has received several improvements to make it more comfortable and efficient in ADS. Like for other weapons damage falloff has been added but the Dragonfly stays the weapon with the longest range after the Protocol sniper rifle.

Developer Notes: The FOV change when shooting with the Riot 1 felt uncomfortable for several players, sometimes even creating motion sickness, it has been removed.

Developer Notes: This change should make the Mine more reactive and more reliable in combat.

Developer Notes: The Cooldown Accelerator no longer requires players to pick up power-ups in the map. The Cooldown reduction is global and affects all players for the duration.

A series of feedback improvements have been made to the Crown to help Contenders chase the Crown Bearer and fight its Defenders teammates.

Developer Notes: We know coordinating with enemies to fight the Squad running away with the Crown is difficult. Those visual improvements should help identifying the right players to target. Making the Crown Bearer more visible will also help chasing it.

Faction War has received a series of feedback improvements to unclutter it in term of UI and make Revives easier.

Developer Comment: This change is more of a design cleanup and should not affect strongly the game experience.

Developer Comment: This change is being done to reduce disruptive mic interactions for players who prefer to rely on the ping system to coordinate with random squadmates.

Developer Comment: This is another frequent community QoL request we are very happy to bring to the game with this patch!