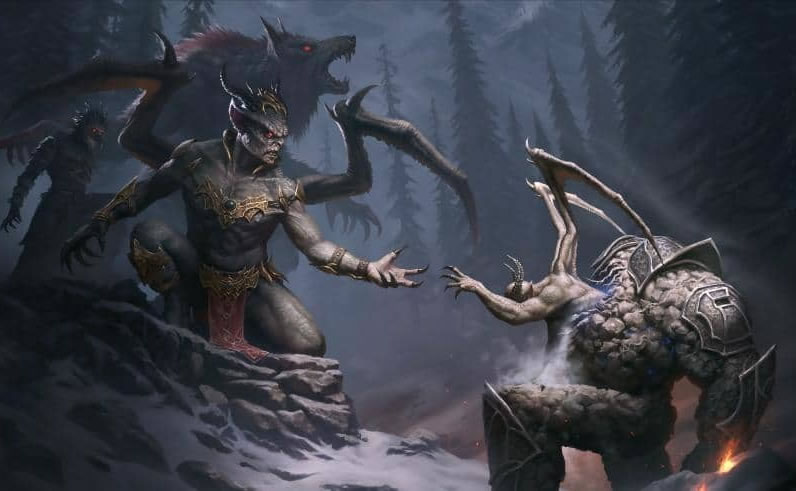 New Zone(s) – Western Skyrim/Blackreach
Prepare to embark on a new journey! In this patch, you can travel to the Nord nation of Western Skyrim and uncover the Dark Heart of Skyrim.

Antiquities
The new Antiquities system allows you to scour all of Tamriel for lost relics and treasures. Through the use of two new Skill Lines and the new Antiquarian’s Eye Tool, you’ll be able to uncover new furnishings, equipment, a mount, and more!

New Trial: Kyne’s Aegis
Kyne’s Aegis is a keep on an island north of Solitude. Its original intent was to be a bulwark against northern invasions which approached the coast via the easiest channel. Thane Ogvar was given ownership over the fort and over time, it morphed into a northern fishing village in addition to a fort. The island’s gold veins led to the Thane establishing a mining operation. Until recently, the fort has remained peaceful with only the occasional northern squall cropping up to cause concern. The transformation of the island to a fishing and mining spot has led to the slow decline of the fort.

A short time ago, tremendously large longships appeared to the north. Before a proper defense could be mustered, these ships crashed into the island, disgorging Sea Giants and Half-Giants, led by a powerful Vampire lord. These creatures of myth quickly overwhelmed the northern section of the island and have begun the assault of the fort proper.

With the island threatened, the Thane has sent for assistance from anyone that can reach the island.

New Item Sets
This update brings a number of new item sets you can obtain through various means, either from the overland, the new Trial, crafting, or the new Antiquities system.

New Collectibles
In this update, we’ve added several new collectibles for you to, well, collect!

New Homes
There are two new homes to obtain in this update:

New Furnishings
A wide variety of new furnishings are available to find or craft with Greymoor.

New Motifs
There are four new motifs being added with this update:

BASE GAME
Vampire Updates
Vampires have received significant changes this update, with a focus on improving the entire experience as a Vampire. Revisions to parts of the Vampire quest, Justice System ramifications, and even improved Feeding visuals are just a few examples of these changes. The Vampire Skill Line has also been updated, adding 3 brand new Active Abilities while also revising the previous Active, Passive, and Ultimate skills that existed before. But be wary – these newfound powers come with even greater drawbacks. It is up to you to decide if the gift of Vampirism is worth the price…

Imperial City Updates
The Imperial City repeatable daily quests (available at the tops of the ladders leading out of your alliance base) underwent significant changes for this update, with the primary goal of making them more friendly for multiplayer, easier to get involved in, and brought up to more modern ESO standards. Note this does not make getting places, fighting monsters, or returning to your base any easier; the Imperial City is just as deadly as it used to be in that regard, so watch your step, bring a buddy or twelve, and be ready to repel enemy players! Or, you know, die and resurrect back at base. You do you.

Housing Precision Editing Mode
Having trouble getting the placement of your furnishings juuuuust right? We’ve all been there, but with the new Precision Editing mode, it’s easier than ever to make it all line up perfectly.

New Achievements
7 new specific achievements for Vampires and Werewolves have been added to the base game for you to obtain.

Updated Character Select Screen
The character select screen has been updated to reflect the snowy environment of Greymoor.

Crown Store Additions
Several new items have been added to the Crown Store to support this update: